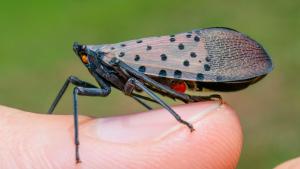 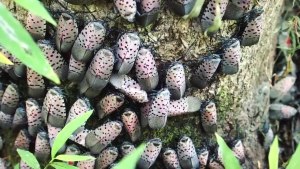 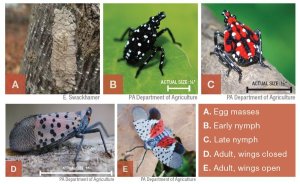 One neighbor near Parkman/Bigelow area reported that a Spotted Lantern Fly (SLF) infestation was found on his property as vines were being cleared in the back yard on July 12.     Another neighbor on Lytton reported finding a dead nymph on his walkway several days ago.

SLF is an invasive species capable of significant damage to trees, vines, crops, and other vegetation.

SLF is not harmful to humans but damage to trees and yard plants can be extensive.

Useful Websites as a source of further information, re reporting and killing these predators:

What is a Spotted Lanternfly?

How to Remove Spotted Lanternfly Eggs

NEIGHBORS ….. PLEASE BE EDUCATED ABOUT THIS DANGER AND HELP DESTROY NESTS AND EGGS AS A PREVENTION OF HARM TO TREES AND PLANTS.

The Second Annual SFCA Summer Block Party was a huge success, held on Sunday July 10,   6 t0 8 p.m.    Over 100 neighbors and friends gathered on Tennyson Avenue, which was closed for the event.   The wonderful Harpers opened their front porch and yard as a hub of action,  while tables and chairs filled the streets.  Food was provided by the Vagabond Taco Truck …  great tacos, chocolate brownies.   Drinks were abundant, music came from speakers, dogs were meeting in the street, and cigar smoke was enjoyed/ignored !    Cornhole competitions were held, while kids enjoyed chalk, hula hoops, bubbles and games.    The beautiful weather and large shade trees provided the perfect ambiance. 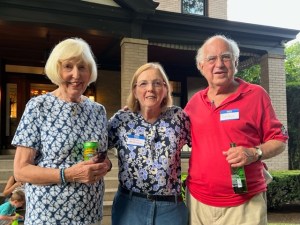 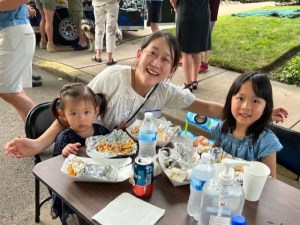 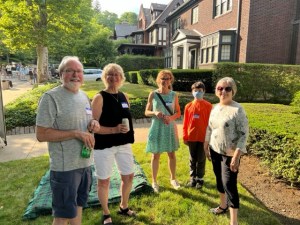 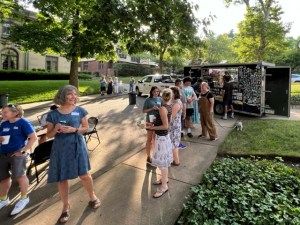 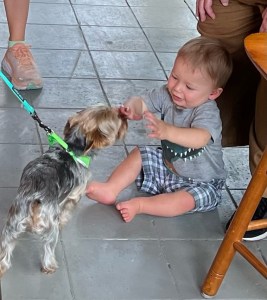 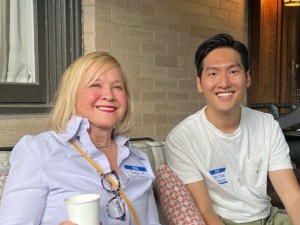 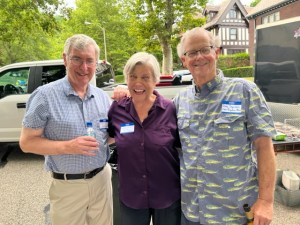 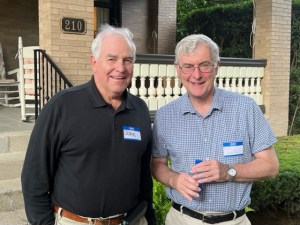 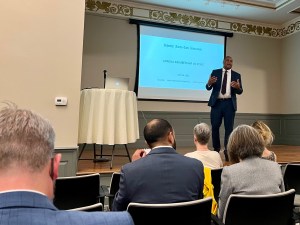 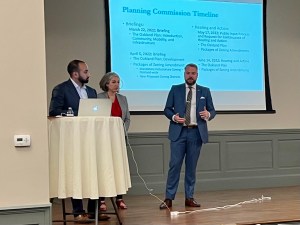 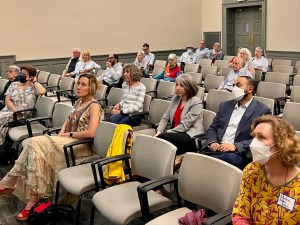 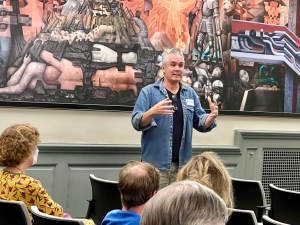 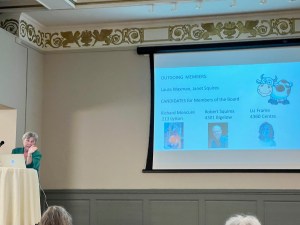 After two years of ZOOM meetings, the annual May meeting was once again being held IN PERSON.    Hurrah!

Location:   Latin American Cultural Center  at  4338 Bigelow   (lower corner of Bigelow and Parkman).    This beautiful building is newly refurbished, was prior home of Historical Society of Western PA.

Mayor Ed Gainey:    a great honor for neighbors, as he spoke about violence prevention, goals for his new administration, plans for development in Oakland

Councilperson Erika Strassburger:   invited by had to decline due to recent Covid;   sent a list of issue updates which were presented by powerpoint

UPMC:   Doug Spies (Sr Director of Architecture and Engineering):  update on new Presby Hospital, with groundbreaking in June and plans for completion in Spring 2026

U Pitt:   Jamie Ducker (ED, the Engaged Campus) and Chuck Alcorn (architect):    announced that One Bigelow Project now on indefinite hold after reassessment of campus/home work situation;  gave update on other projects including currently-under-construction Health Ctr on O’Hara and plans for hilltop dorm construction

Update of activities from board.

January is time for renewal of RPP – Resident Parking Permit

Schenley Farms neighborhood has been a restricted parking area since 2013, with residents allowed to purchase Resident Parking Permits.  These need to be renewed each January.   Cost is $20 per car, plus $1 if a option for visitor parking is needed.

The following steps are instructions from the Parking Authority staff:

After submission,  staff will review the files. An email confirmation that the permit has been approved and the payment has been processed is sent, if successful.  No decals are sent out, but parking enforcement staff will have license numbers in their system.

Note from a homeowner:  it is relatively easy to take a phone camera photo and upload to application site.  But they were picky !!  To prove residence, they required a full-page utility bill (or equivalent) with names; they didn’t like my partial logo/address only section.   And they told me it was blurry twice, before accepting what looked OK to me.    I admit …  I was a little offended that my camera work was being criticized!!   Still …. a pretty smooth operation !!

Second Note:  There were prior concerns re changes for RPP areas (see Oct 2021 note) , which would allow paid-for parking along side neighbor permit parking.  Changes still not completed through City Council.   But pretty clear that this was a suggestion strongly desired by some RPP neighborhoods, and would not be applied generally.   There will be no RPP changes until/unless our specific neighborhood desires.

There were many concerns about pedestrian safety at this complex intersection …   leading City Traffic Officials to initiate improvements which began in August 2021.  There were multiple delays, especially with utility upgrades needed underground in the area.  Members of SFCA were involved with the planning steps.

Department of Mobility and Infrastructure

A few other changes for neighborhood residents:   removal of several parking spaces on lower Bigelow right side just before stoplight;   elimination of right-turn-on-red when coming down Bigelow from Schenley Apts.

Currently a proposal for changes to the Resident Permit Parking (RPP) process is under consideration by Pgh City Council.   There is a public hearing before this Council on Thursday, November 4, 2021.

Several neighbors have raised concerns, since one particular aspect of the proposed changes might impact Schenley Farms neighborhood adversely, namely the creation of a “hybrid-RPP” parking zone.    If passed, this would create a process whereby some now-protected RPP neighborhoods could be switched to a ‘hybrid’ system, where residents with permits would share street parking spaces with persons paying through a parking kiosk.

Because community input is so important,  SFCA board has sent information to neighbors about this potential change.

3.)   Invitation to a Neighborhood Zoom meeting on Monday Nov 1 6:00 p.m., if you are interested in learning more or giving feedback

4.)   Commentary by one neighborhood advocate (Norm Clearey) which explains alo

Of note,  this is the initial legislative process.   It is NOT the time when decisions about specific neighborhoods are being made.    If ‘hybrid RPP’ zones are created in Pittsburgh, there will be time for discussion and a possible need for widespread neighborhood involvement.

Includes a survey of community input, with approx. 2200 respondents.

A ZOOM meeting will be held soon, with neighbors invited to learn more and to give input.

On Thursday October 14, 2021, the 4th Annual Lecture in the “Exploring Our Roots” series will be held at the newly renovated and repurposed historic building at 4338 Bigelow.   This was previously  home to the Historical Society of Western Pennsylvania, and is now the new home for the Latin American Studies Assn Cultural Center.

The speaker will be Len Barcousky,  who wrote an Eyewitness History column for the Pgh Post Gazette for many years.   All SF residents are invited.  The event is also open and free to anyone interested in local history.   Face Masks are required as a public health measure.

TOPIC:  Everybody came to Oakland: Residents of Schenley Farms had front-row seats to visits by, among others, a renowned physicist, a U.S.president and a popular preacher.

Len Barcousky got his first job in journalism in 1970, and this year he marked the 51st anniversary of the start of his newspaper career. He spent almost 30 years as a reporter and editor at the Pittsburgh Post-Gazette.

A graduate of Penn State with a degree in English, he has a master’s degree from Columbia University Graduate School of Business.

Len is the author of three books about the region:

For 12 years he wrote a bi-weekly “Eyewitness” column for the Post-Gazette. In it, he investigated how now historic and not-so-historic events were reported originally in the Post-Gazette and its predecessor publications. 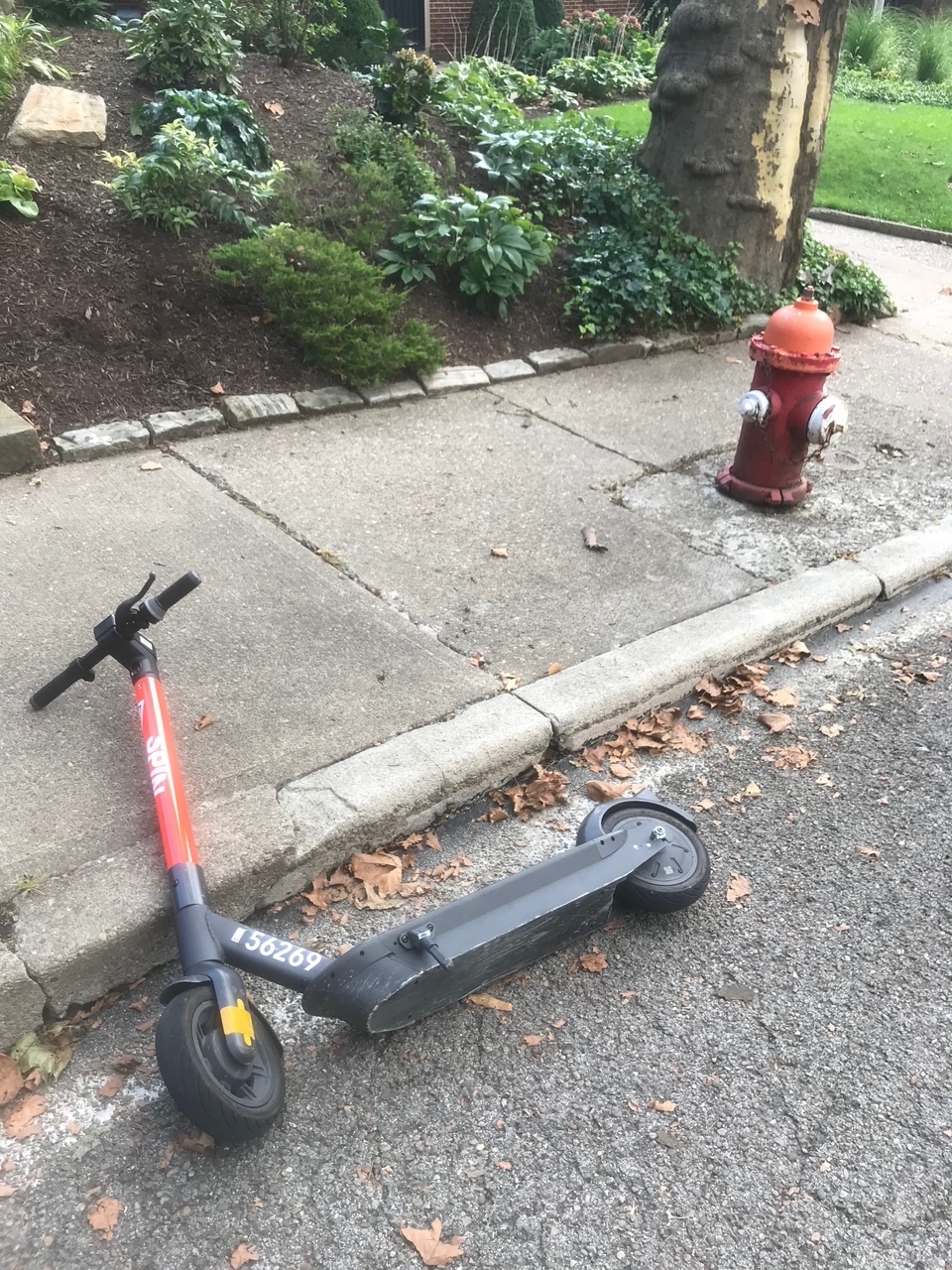 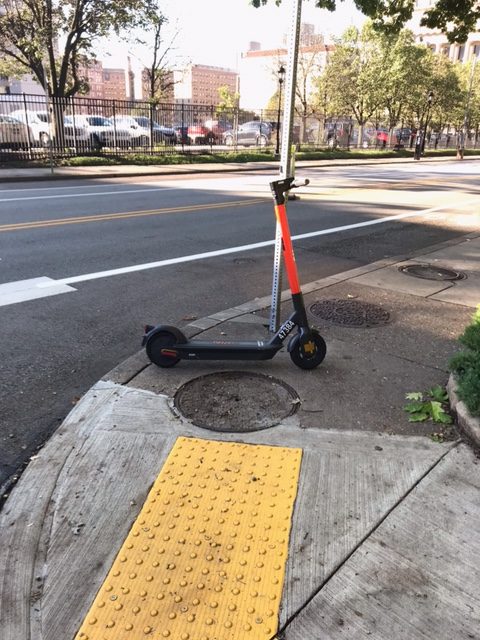 Several neighbors have noted and reported that the new SPIN electric scooters have been found inappropriately left on sidewalks in the neighborhood.   See photos (submitted by S. Weinberg).

There have also been concerns of zipping riders weaving along Bigelow, posing new challenges for drivers, pedestrians and bikers.

On 9/14/21, the Post Gazette had an oped piece about the issue.   Pgh City Council will be having hearings soon, planning to draft legislation to regulate use.

This issue will take a more time and thought, but reports of concerns are helpful to city council staff, who are working on appropriate legislation.

Insects a threat to trees – Spotted lanternflies and how to handle

On August 25 there was a local news report about Spotted Lanternflies in our region.

Because these pests can cause widespread destruction of trees, it is important to know what they look like and what steps you can take to mitigate their spread.  This is particularly important as we enter the Fall, when these insects lay their eggs.  Destroying the eggs is the best opportunity to slow their spread.

What is a Spotted Lanternfly?

How to Remove Spotted Lanternfly Eggs 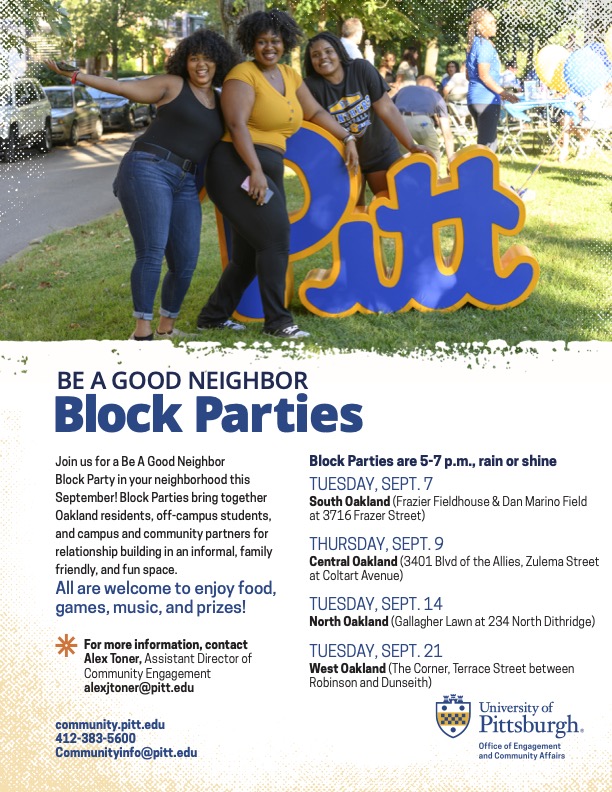