Every winter about 20 – 30 thousand migratory crows invade Pgh, seeking overnight roosting sites. For the past several years, the tall trees of SF streets has been a favorite of the visiting crows. This has caused considerable annoyance, especially the large amount of bird droppings on the ground as well as the raucous cawing in the evenings and early mornings. In 2019, a huge flock of crows arrived around mid-October and stayed until late January. Neighbors, especially along Bigelow Blvd but also near the Parkman wall, all have numerous tales of woe – scraping sidewalks, smelling the odiferous droppings, waking to socially-active boisterous birds preparing to leave for the day.

While crows are amazingly smart and interesting, and very important to the ecological systems, several neighbors decided that perhaps there were ways to encourage them to settle in places other than treasured residential trees. In Feb 2020, a first meeting was held, attending by Pgh City staff, District 8 Councilperson Erika Strassburger, representatives of USDA and members of Pitt and Oakland communities. A plan was prepared, with lots of input from bird-admiring wildlife experts. Our ultimate plan was dubbed CROW: Committee to Re-locate Our Wildlife. Components included distribution of wooden boards useful for clapping noises, pyrotechnic noise makers, small fireworks, and a variety of small efforts (dead bird effigies, lights on buildings; one neighbor spotted a hawk which may have also discouraged bird squatting).

The effort captains were Laura and Shirley, who created a text message blast list. About 18 families volunteered to make noise and sound in the early eveningtide as birds were seeking nighttime accommodation. Crows arrived into the city in the early weeks of November, and a coordinated effort was underway.

AND NOW WE ARE READY TO CLAIM SUCCESS!!!

Certainly crows have been around, and they fly overhead for short periods in the evening and morning. But none spend the nighttime here. Many organizations have collaborated and helped – U Pitt groundskeepers, UPMC (helicopter routes were unhindered), City of Pgh zone 4 police, City staff. What a great neighborhood effort !!! We will stay alert through December and January, but hope that the birds are happy in other quarters !!

Images:
board clappers used by Pitt groundkeepers
dead crow effigy on a rooftop (not visible from below)
Neighbor Norm sawing the board clappers given to neighbors 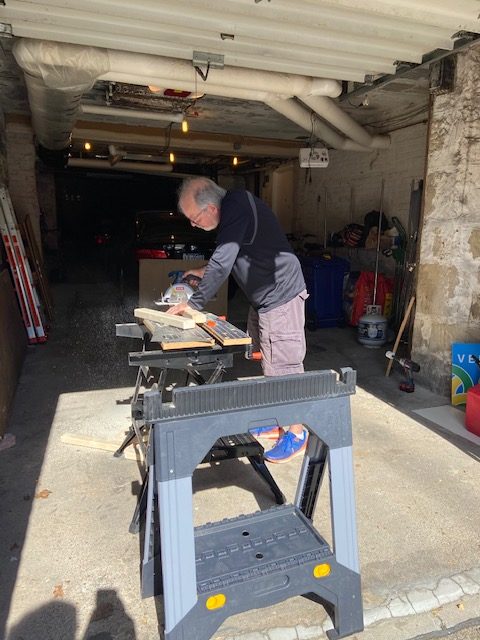